A by-election took place on Thursday, 27 November, 2014, to fill a vacancy in the Troup ward of Aberdeenshire Council (Ward 2). The vacancy had arisen because of the death of Councillor John Duncan.

A list of polling places in the ward can be found in the attached Notice of Situation of Polling Stations.

The election count was conducted electronically on Friday, 28 November, in Macduff Town Hall, and the first preference votes for each candidate were as follows:-

After the application of the STV rules, Ross Cassie was elected at the sixth stage.

The Returning Officer has made voting information from the Aberdeenshire Council By-Election in the Troup Ward available to anyone who wishes to find out more about how voters ranked the candidates in order of preference.
The first line of the report shows how many candidates there were and how many councillors were to be elected. The subsequent lines begin with the number of voters who ranked the candidates in the same order. There then follows the order that those voters used. For example, the row in bold below shows that 71 voters gave their first preference to the candidate who appeared first on the ballot paper, and their second preference to the candidate who appeared second. The names of the candidates in the order they appeared on the ballot paper is given at the end of the report.
The figure ‘0’ means that there were no more preferences given to any candidate by voters who used this sequence. The final ‘0’ on the last line shows that the report has finished and no more sequences were used. 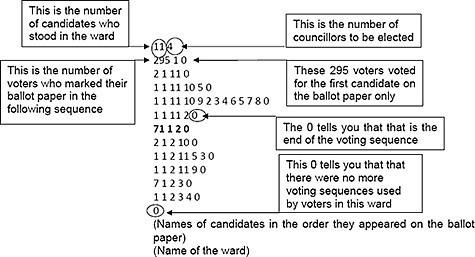 If you have any questions about these reports, please contact the Aberdeenshire Elections Office on 01224 665119 or elections@aberdeenshire.gov.uk.

Rule 61 of the Scottish Local Election Rules requires that in a contested election where the count is conducted by means of an electronic counting system, the Returning Officer must within one week of the declaration of the result of the poll, give public notice of the number of first and subsequent preferences for each candidate cast at each polling station.
Where less than 200 votes were cast at a polling station, the Returning Officer must aggregate that information with information from one or more polling stations in the same ward.
All postal ballot papers cast in a ward are treated as if cast at a single polling station in that ward.
The methodology for combining batches of less than 200 votes (PDF 33KB) is available here.

In releasing the data, the Returning Officer is making it freely available for public use. It is not subject to copyright and material may be re-used provided that it is acknowledged, not used in a misleading way and is reproduced accurately. The Returning Officer does not accept responsibility for any alteration or manipulation of the data once released.