Named after the group at Balnuaran of Clava, near Inverness, these burial cairns were erected in the early Bronze Age (c 2000 BC) with a stone circle surrounding either a chambered tomb or a ring cairn. They have a close but as yet imperfectly understood relationship with recumbent stone circles. 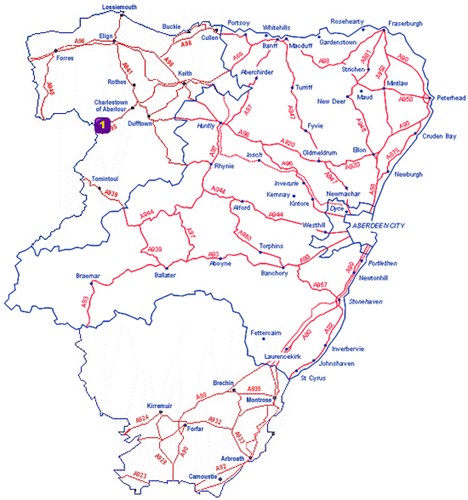 A Clava ring cairn, on a river terrace, consisting of a circular bank of small stones c 14 m diameter round a central space 5 m diameter. One kerbstone is visible in the W arc. Note the massive standing stone (2.74 m high) in the SW and the other stones which are the remains of the surrounding stone circle. Nine stones can be traced: 5 standing, 1 in the wall, 1 leaning and 2 fallen. C 9m to the SE of the largest stone are 2 upright slabs which may be the remains of another monument.

Plan of the Clava cairn at Marionburgh

7 miles SW of Aberlour, on a shallow bend, turn W off A95 down a broad track for 170 m to where the cairn lies in an enclosure on the S side.