The fast-growing town of Ellon now has its own circular walk enabling visitors and residents to appreciate the town's unrivalled setting by the banks of the Ythan.

The waymarked walk "a'boot Ellon" takes in the riverside as well as the wooded parklands behind the heart of the town.

Credit goes to the Formartine Partnership which designed the route with help from Aberdeenshire Council.

A circular walk around the town of Ellon in Aberdeenshire.

The town of Ellon has grown considerably in recent years and now has approximately 9000 inhabitants.

However, the town has kept many of its distinctive features and on this walk you will see the wealth of local history and wildlife habitats that this small town can offer.

The walk is four miles long, on easy, flat terrain. You will need sensible walking shoes or boots, as the track is un-paved in places and includes steps and slopes.

The walk can be taken in either direction, but the information here assumes you are walking in an anti-clockwise direction. 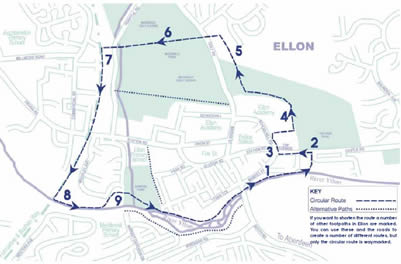 Follow the path round to the left until you reach Golf Road, which you should cross with care, and then follow the path into the golf course.

After 50 metres follow the steps into McDonald Park Woods, gifted to the town by Sir James McDonald, a native of Ellon.

This area abounds in wildlife, with red squirrels occasionally seen here and you may be able to find one of their nibbled spruce cones on the ground.

Cone seeds are the favourite food of these uncommon animals but they will also eat beech masts, berries, lichens, fungi and sometimes non-vegetarian food such as insect larvae.

Besides the more common species like blackbird and robin, less frequent visitors include dippers (hunting for insects along the burn which runs at the side of the woods) and sparrowhawks.

After dark, the distinctive call of the tawny owl is often heard and in the summer months the rustling and snuffling of a foraging hedgehog is not an unusual sound.

Follow the signposts through the wood until you reach Hospital Road, which you should also cross with care.

Slightly to your left you will see a tarmacked path which passes between the council depot and the golf course. Take this path and turn left where it meets a gravelled track.

The Ellon circular walk starts in the riverside car park in Market Street, from where you can see one of Ellon's greatest assets – the River Ythan.

The river contains a wealth of wildlife, some easier to spot than others. You may well see the grey heron, in shallow water by the river's edge, waiting for a fish or other small creature to come within grabbing range. But the river is also home to swans, salmon, trout, and even the elusive otter.

The Ythan is renowned for its salmon fishing and for several centuries it was also known as a rich source of pearl mussels. These creatures, now protected by law, can produce some truly beautiful pearls, which in the Ythan's case really were fit for a king.

A pearl found at the mouth of one of its tributaries was of such high quality that it was presented to King James VI and now forms one of the brightest jewels in the Scottish Crown.

Immediately around the car park you will see other evidence of the rich local history of Ellon.

The New Inn Hotel was previously a changeover point for horses pulling coaches between Aberdeen and Peterhead.

At this point the river was low enough to be forded and for many years it was the main crossing point for traffic going to and from the Buchan area.

By the entrance to the car park you can see the cairn that marks Moot Hill.

In the Middle Ages, the Earls of Buchan used this spot to hold court, administer justice and collect rents. Perhaps their wrath at tardy rent payers was calmed slightly by the background music of the river's flow!

Follow the tarmac path out of the carpark with the river on your right and the bridges behind you. You will pass some houses before coming to the edge of an open space, known as the Glebe Field. Turn left here and take the path up onto Castle Road.

This is the Formartine and Buchan Way, which is the route of the old railway line from Aberdeen to Peterhead and Fraserburgh.

In recent years it has been restored to form part of a network of cross-country walks.

Cross the main road by the newsagents and continue along the Formartine and Buchan Way (in the direction of Udny Station).

When you come out onto Castle Road, turn left and walk back towards the town.

On your right you will see the old Deer Dykes which were built to provide local employment in the mid 19th century.

They are 400 yards long and 12 feet high in places and they now serve an important purpose in keeping footballs rather than deer on the school playing fields!

Along the wall you may well see a plant known as ivy-leaved toadflax (sometimes misheard and pronounced as 'I believe in Toadflax'!) growing amongst the stones on the wall. During the summer months this plant has an attractive, lilac-coloured flower and its small, ivy shaped leaves can be seen all year round.
Railway Viaduct

Turn off the Formartine and Buchan Way just before the old railway viaduct, which was built in 1861, a second attempt after the first fell down within a year!

When you reach the point where the road divides by the war memorial you should take the road to the right.

Both the war memorial and Ellon Parish Church are well worth a closer look if you have the time.

You might also like to look at the Coat of Arms carved into the side wall of the estate agent's office.

This is believed to be the Coat of Arms of Baillie James Gordon and it includes boars' heads, crossed keys and a spray of black berries along the top.

To continue on the walk follow Schoolhill Road for approximately 100 metres and then turn right again by the British Telecom building.

You may be able to catch a glimpse of the ruins of Ellon castle on your right hand side, although the castle isn't open to the public. Take the track that goes past the back of the BT building and then turn left at the high wall of the castle garden.

Follow this track up and then bear left to take you out into the Ellon Academy bus park. Be aware that this car park is very busy at certain times of the day and you'll need to take care as you cross.

Follow the step down onto the riverside and head back towards the centre of town (the river should be on your right again).

Depending on the time of year when you are walking, you may well see a colourful array of flowers along the river bank. In early spring the shiny yellow flowers and heart-shaped leaves of lesser celandine are a frequent sight.

In late spring and early summer the taller and white flowered garlic mustard can be clearly smelt as well as seen.

This plant is very aptly named and in the past its strongly aromatic leaves were widely used in cooking.

Cross the bus park with care, go up the steps into the woods and turn left.

You are now entering a grove of larch trees, which, despite being conifers, still lose their needles in winter.

Follow the path through the wood as it bears to the right.

Turn left after about 200 metres and you will see a pond on your right hand side.

You may well see ducks and moorhens on the pond but it is also home to various fish, amphibians and a whole host of invertebrate species.

Stickleback, eel, frog, toad, newt, snail, beetles and the larvae of damselfly, mayfly, stonefly and caddisfly are amongst the many creatures that have been found here.

Turn right around the back of the pond and follow the signs along the path into Gordon Park and the playing fields.

The path takes you back to the riverside and under the new and old bridges. The old bridge was built in 1793 and is now closed to vehicle traffic. It is said that the wood used to form the arches of this bridge was floated down the River Don, out into the sea at Aberdeen, along the coast and back up the River Ythan – a tricky task given the high wind speeds that are common in the north east!

After you pass under the bridges you will re-enter the riverside carpark where you began your walk.

On your way you will have seen a variety of different wildlife habitats and much evidence of the diverse history of Ellon.

We hope you have enjoyed your walk around Ellon and, if after all that walking you are in need of light refreshments, Ellon has a variety of hotels, cafes and pubs to assist you!

On your right you will see a small plaque which marks Caroline's Well.

The well is named for Caroline Hamilton Gordon who lived at Ellon Castle at the beginning of the 20th century.

The area around the well contains Scots Pine and beech trees and in the autumn time there will be many species of fungi lurking on the woodland floor and dead wood around this area.